The video above is of my most recent bent VSS-30 that uses a 12 point switch bay using 2 way center off switches. This is my documentation on bending a Yamaha VSS-30. This ultra sampling keyboard has some really awesome capabilities on it’s own. I got this info initially from one of the bending forums, but I don’t know who to credit, so thanks whoever you are! I know some folks haven’t bent their VSS yet due to fear of frying, so hopefully this guide will help you. 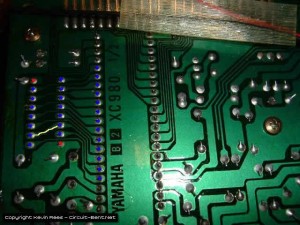 *Note*When I first did this bend, I avoided the 2 red dots (power and ground). I’ve since bent another VSS-30 and used these points with no ill effect. As always, bend at your own risk */note* The blue dots in 2 rows are the points of the sampling chip. The blue dots in a straight line going up and down is where the points connect to the big chip. There are 2 pins on the sampling chip that connect to each other (yellow line), so that gives you 15 points to bend. I chose to use 12 of those points for symmetry, and I chose to use an RCA style patchbay. I found that Tablebeast did a layout on one of these that I really liked, so I did this one the same way. You can see/hear his Here. I chose to solder to the points that were up and down in a straight line for ease of bundling. 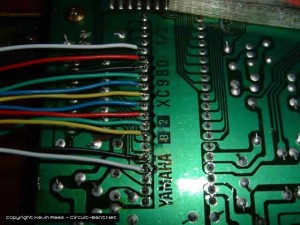 Here’s the board wired up. 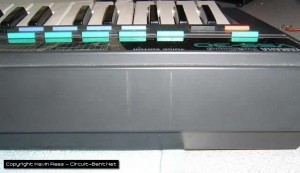 Here’s the area where I chose to put the RCA connectors. I checked, double checked my measurements. The pencil lines you see are where there’s a plastic support on the inside of the case.

Here’s the installed RCA jacks. Not absolutely perfect (need a drill press for that), but lookin’ pretty good IMHO.

Now let’s test it. Record a sample, and play it to make sure it recorded decently. Now plug in a patch cable to two of the RCA jacks. You should get all manners of distortions, tremolos, and all kinds of other effects on the sample. Layer the bends on top of each other with more patch cables, and you can completely change the sample so that it sounds nothing like it originally did. I used the loop feature built into the VSS to make some really awesome loops with the bent samples.

There’s an audio sample of this on my sample page.

As always I take no responsibility if you happen to touch the wrong point on your VSS, and kill it. I found this bend to be very reliable, and not to difficult to do if you take your time.