Mutators are a series of effects pedals I’ve been working on for a little while. A Mutator is, at it’s core, the circuit from a toy voice changer used as an effects pedal. I’m not the first one to do this by a long shot, but I build them more like real guitar pedals, which I haven’t seen anyone else doing so far.

One thing I want to say right now before I go any further is that these pedals are NOISY. They are not high quality/expensive pitch shifters, or ring mods with no carrier bleed. They pretty much destroy the tone of anything you run through them (in a good way IMHO). Also, when you aren’t playing with the effect on you will get the “background noise” (barely audible hissing, and osc bleed through) from the circuit. These circuits also have a built in gate, so when you play a note the pedal while shut it off when it decays to a certain point (cuts the sustain of the note). I’ve tried putting a booster in the front end of the pedal to help with this, but you could just run a distortion in front of it for the same effect.

Mutator features/options
Mutators in most cases get re-housed into a stronger (metal) housing. I add quality 1/4 inch input and output jacks, and a true bypass stomp switch with indicating LED. They almost always run on a 9v battery, and get a new, better 9v connector. I replace the sound selection switch with a new stronger switch to go between the sounds on the voice changer (usually “Spaceman, Ghost, Alien, Robot”, etc) There are usually 3 different sounds to choose from, so there is a three position switch on the Mutator. I’ve been able to do this with toggles, and rotary switches, so let me know if you have a preference. Next I add a knob that controls the “pitch” of the sounds. These things sound pretty wild just running something through them un-modified, but playing with this knob, and you get some really unusual sounds. This pretty much covers the “Basic” Mutator setup. Average price for one with these controls is about 80.00 dollars.

If the “basics” isn’t enough knobs for your knob twiddling pleasure I’ve come up with several more mods to these pedals.

The first one is the easiest, a Volume knob. Simple, but useful. If that’s the only option you want on a “basic” then ask me nice, and I’ll likely put it on for free.

Next is a Gain knob or switch (depends on the circuit). It cranks up the volume and adds more distortion to the sounds. Quite brutal!

Third is an Oscillation effect. This adds a sqaurewave osc to the sound of the pedal that has controllable pitch with a knob, and an on/off switch for the effect. Very thick and synthy, but of course adds to the overall noise of the pedal.

Fourth is a Feedback control. Much like a Feedback Loop pedal I feed the output of the pedal back into it’s input through a knob, and a on/off switch. Modulations galore!

Another feature I’ve added is a Starve feature. This literal turns down the amount of power that the internal audio chips are getting. It does pretty much what you would expect it to do, noisy degradation of the audio with major gating. Controlled with an on/off switch, and knob.

On several pedals like this I’ve added the ability to control an effect with a light dependant resistor. What the LDR does is change the pitch when something shadows the amount of light going to it (be it your hand, or toe of your shoe). The more light it sees the higher the pitch, the less it sees the lower the pitch (generally, but there are exceptions). Controls are a switch and LDR.

These controls will run at about 120 to 140 depending. These are also very dependant on how the circuit behaves, one mod might work, while another doesn’t. Another thing to add to this part is stomp switches. I can setup any of these features to be activated with a stomp switch+indicating LED so you don’t have to bend down while playing to turn it on. This of course adds to the cost because stomp switches are pricey.

Added Circuity
Now we get to some more advanced stuff where I actually add circuitry to the pedal. As stated above I have put booster in front of the circuit to boost the signal above the gate for a longer sustain. This could have a gain control on it, or could just be set at a static amount of gain.

Next is the addition of an LFO to modulate the pitch. This will effect the sound of the pedal everytime the LFO cycles giving it a rhytmic pitch shifting character not unlike some of the old modular synths. Controls are an on/off switch, rate knob, and (sometimes, depends on the circuit) rate indicating LED.

I have a few more ideas for this that I haven’t tried yet. One is a triangle shaped LFO to cause swelling up and down pitch changers similar to a phaser. The other is an envelope tracking circuit that will change the pitch with the strength of the guitar/whatever’s signal.
These mods run 140 and up depending on what else you would like to have.

Here’s some of the Mutators that I’ve already built. All are already sold unless otherwise indicated. Scroll down to the bottom for the most current builds. 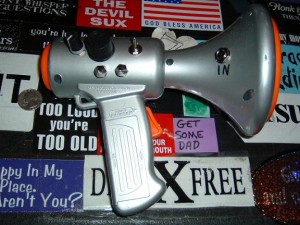 This is the first mutator I built. I decided to leave it in the megaphone housing because I had room for the input, and output jacks. Both of the jacks muted the speaker, and microphone respectively. I also added a switch that would lock the trigger switch in the “on” position. I added a course, and fine mutation control, and body contacts that modulated the effect. This Mutator has been sold. 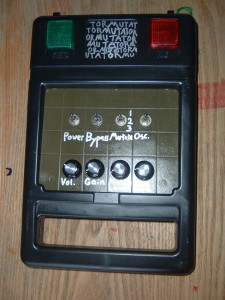 The second mutator I built I housed in an old Radio Shack computer toy. I set this up to be a “table top” effect for the Noise crowd. When looking at the circuit I noticed that it had an LM386 in it for amplification. I knew that was a common chip for guitar effects, so I used some of the tricks I learned from Colin of Experimentalists Anonymous. Colin has a pedal he builds based off of the LM386 called the Parallel Universe that has a gain and osc. feature. Based off of Colin’s schematics I was able to add these effects to this Mutator. The controls on this Mutator were On/Off switch, True Bypass switch, 3 way Mutation selection switch, Osc. on/off switch, Volume knob, Gain knob, Mutation knob, Osc. Freq. knob. This Mutator has been sold. 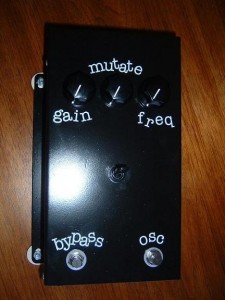 The 3rd Mutator I built was the first that was setup like a guitar effect box. I housed it in a the box for a piece of test equipment (the box is HUGE). I set it up with a true bypass stomp switch, 3 way switch to select the different sounds,gain, mutation, and osc. frequency knobs, and a stomp switch to turn the osc on/off. There are bright orange LEDs inside the box for the bypass, and osc switches that shine out the sides. This Mutator has been sold. 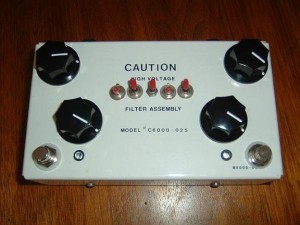 This is the 4th Mutator I’ve built. I housed it in an old box marked “High Voltage” (pretty cool!). This one has a true bypass stomp switch, volume, gain, mutate, and strave knobs, 5 switches to select different sounds, and a stomp switch to turn the strave feature on/off. There are 2 bright orange LEDs that indicate bypass, and starve on/off. This Mutator has been sold. 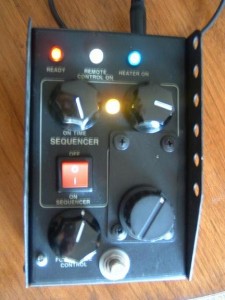 This is the 5th Mutator I’ve built. This one is housed in the control box for an old fog machine. This one has a true bypass stomp switch, gain, mutation, and feedback knobs, an on/off for the feedback, and a rotary switch that selects the different sounds. The red, white, and blue lights on top indicate bypass state, and the orange light indicate feedback on/off. This Mutator has been sold. 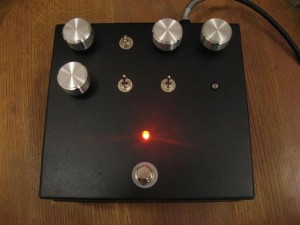 I built this Mutator for Opsysbug. It has the usual Mutator controls, plus an LFO feature that stutters the mutation in a rhythmic pattern. The LFO has a rate knob and on/off switch. This Mutator has been sold. 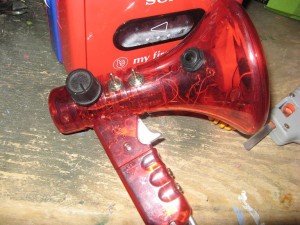 A throw back to the first mutator. This one has the the mutate knob, body contacts that have the same effect as the mutate knob mounted in the handle, feedback switch, gain switch, trigger lock switch (keeps it on), and switching 1/4” input and output jacks. Click on the picture for a sound sample. This mutator is sold. 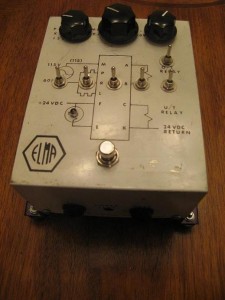 This Mutator is similar to the IV. It has mutilple switches to select the different sounds, Gain/volume knob, and Course and fine mutation controls. It’s mounted in an old relay box of some sort. This Mutator has been sold.

Housed in one of the cooler enclosures I’ve ever recycled, this mutator has a Volume knob, Mutation switch and pitch knob, and a feedback knob. It has a true bypass stomp switch, bright blue LED, and runs on a 9V battery. It is currently for sale for 100.00 plus shipping. This pedal has sold.